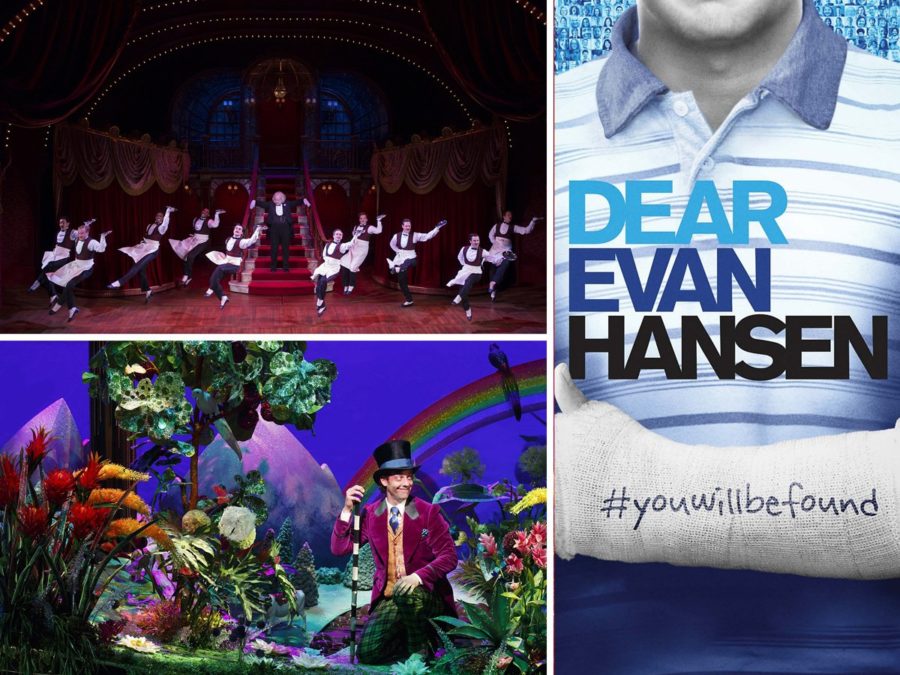 The biggest hits on the Great White Way are headed to Boston as part of the just-announced Lexus Broadway in Boston at The Boston Opera House and Emerson Colonial Theatre 2018-2019 season!

Broadway blockbusters Dear Evan Hansen, Hello, Dolly! and Roald Dahl's Charlie and the Chocolate Factory will be part of the upcoming season. The lineup will also include The Play That Goes Wrong, Beautiful—The Carole King Musical, School of Rock, The Illusionists—Live From Broadway, A Bronx Tale, Les Miserables, Kinky Boots and Miss Saigon.

Learn more about all of these exciting stage hits below!

THE PLAY THAT GOES WRONG
November 7 – 18
What would happen if Sherlock Holmes and Monty Python had an illegitimate Broadway baby? You’d get The Play That Goes Wrong, Broadway and London’s award-winning smash comedy! Called "a gut-busting hit" (The New York Times) and "the funniest play Broadway has ever seen" (HuffPost), this classic murder mystery is chock-full of mishaps and madcap mania delivering "a riotous explosion of comedy" (The Daily Beast). Welcome to opening night of The Murder at Haversham Manor where things are quickly going from bad to utterly disastrous. With an unconscious leading lady, a corpse that can’t play dead and actors who trip over everything (including their lines), it’s "tons of fun for all ages" (HuffPost) and "comic gold" (Variety)—sure to bring down the house!

ROALD DAHL'S CHARLIE AND THE CHOCOLATE FACTORY
January 8 – 20, 2019
Roald Dahl's amazing tale is now your golden ticket! It's the perfect recipe for a delectable treat: songs from the original film, including "Pure Imagination," "The Candy Man" and "I've Got a Golden Ticket," alongside a toe-tapping and ear-tickling new score from the songwriters of Hairspray. Willy Wonka is opening his marvelous and mysterious chocolate factory…to a lucky few. That includes Charlie Bucket, whose bland life is about to burst with color and confection beyond his wildest dreams. He and four other golden ticket winners will embark on a mesmerizing joyride through a world of pure imagination. Now's your chance to experience the wonders of Wonka like never before—get ready for Oompa-Loompas, incredible inventions, the great glass elevator, and more, more, more at this everlasting showstopper!

BEAUTIFUL—THE CAROLE KING MUSICAL
January 29 – February 10, 2019
Beautiful tells the inspiring true story of Carole King’s remarkable rise to stardom, from being part of a hit songwriting team with her husband Gerry Goffin, to her relationship with fellow writers and best friends Cynthia Weil and Barry Mann, to becoming one of the most successful solo acts in popular music history. Along the way, she made more than beautiful music—she wrote the soundtrack to a generation. Featuring a stunning array of beloved songs written by Gerry Goffin/Carole King and Barry Mann/Cynthia Weil, including "I Feel The Earth Move," "One Fine Day," "(You Make Me Feel Like) A Natural Woman," "You’ve Got A Friend" and the title song, Beautiful has a book by and Tony Award nominee and Oscar-nominated writer Douglas McGrath, direction by Marc Bruni, choreography by Josh Prince, and took home two 2014 Tony Awards and a 2015 Grammy Award.

SCHOOL OF ROCK
February 12 – 24, 2019
School of Rock is a New York Times Critics’ Pick and "an inspiring jolt of energy, joy and mad skillz!" (Entertainment Weekly). Based on the hit film, this hilarious new musical follows Dewey Finn, a wannabe rock star posing as a substitute teacher who turns a class of straight-A students into a guitar-shredding, bass-slapping, mind-blowing rock band. This high-octane smash features 14 new songs from Andrew Lloyd Webber, all the original songs from the movie and musical theater’s first-ever kids rock band playing their instruments live on stage. Vanity Fair raves, "fists of all ages shall be pumping!"

THE ILLUSIONISTS—LIVE FROM BROADWAY
March 5 – 10, 2019
Direct from Broadway, the world’s best-selling magic show is coming to you. This mind-blowing spectacular showcases the jaw-dropping talents of five of the most incredible Illusionists on earth. The Illusionists—Live From Broadway has shattered box office records across the globe and dazzles audiences of all ages with a powerful mix of the most outrageous and astonishing acts ever to be seen on stage. This non-stop show is packed with thrilling and sophisticated magic of unprecedented proportions.

A BRONX TALE
April 2 – 14, 2019
"Wonderful and refreshing! The kind of tale that makes you laugh and cry," says The New York Times. Broadway’s hit crowd-pleaser takes you to the stoops of the Bronx in the 1960s—where a young man is caught between the father he loves and the mob boss he’d love to be. Bursting with high-energy dance numbers and original doo-wop tunes from the songwriter of Beauty and the Beast, A Bronx Tale is an unforgettable story of loyalty and family. Academy Award winner Robert De Niro and Tony Award winner Jerry Zaks direct this streetwise musical—based on Academy Award nominee Chazz Palminteri’s story—that The New York Times hails as "a Critics’ Pick" and amNewYork describes as "a combination of Jersey Boys and West Side Story."

LES MISERABLES
April 16 – 28, 2019
Cameron Mackintosh presents the new production of Alain Boublil and Claude-Michel Schönberg's Tony Award-winning musical sensation, Les Miserables, direct from its acclaimed Broadway return. Featuring the beloved songs "I Dreamed A Dream," "On My Own," "Stars," "Bring Him Home," "One Day More" and many more, this epic and uplifting story has become one of the most celebrated musicals in theatrical history. With its glorious new staging and dazzlingly reimagined scenery inspired by the paintings of Victor Hugo, this breathtaking new production has left both audiences and critics awestruck. "Les Miz is born again!" (NY1).

KINKY BOOTS
May 7 – 12, 2019
Kinky Boots is Broadway’s huge-hearted, high-heeled hit! With songs by Grammy Award- and Tony Award-winning pop icon Cyndi Lauper, this joyous musical celebration is about the friendships we discover, and the belief that you can change the world when you change your mind. Inspired by true events, Kinky Boots takes you from a gentlemen’s shoe factory in Northampton to the glamorous catwalks of Milan. Charlie Price is struggling to live up to his father’s expectations and continue the family business of Price & Son. With the factory’s future hanging in the balance, help arrives in the unlikely but spectacular form of Lola, a fabulous performer in need of some sturdy new stilettos. With direction and choreography by two-time Tony Award winner Jerry Mitchell (Legally Blonde, Hairspray) and a book by Broadway legend and four-time Tony Award winner Harvey Fierstein (La Cage Aux Folles), Kinky Boots is the winner of six Tony Awards, including Best Musical, Best Score and Best Choreography.

MISS SAIGON
June 12 – 30, 2019
The New Yorker calls it "a dynamite Broadway revival." Experience the acclaimed new production of the legendary musical Miss Saigon, from the creators of Les Misérables. This is the epic story of a young Vietnamese woman named Kim. In a bar run by a notorious character called The Engineer, Kim meets an American G.I. That encounter will change their lives forever. Featuring stunning spectacle, a sensational cast of 42, and a soaring score including Broadway hits like "Last Night of the World," "The Movie in My Mind" and "The Heat is On in Saigon," this is a theatrical event you will never forget. NY1 says, "the new Miss Saigon soars to the rafters!"

DEAR EVAN HANSEN
July 10 – August 4, 2019
Winner of six 2017 Tony Awards, including Best Musical! A letter that was never meant to be seen, a lie that was never meant to be told, a life he never dreamed he could have. Evan Hansen is about to get the one thing he’s always wanted: a chance to finally fit in. Dear Evan Hansen features a book by Tony Award winner Steven Levenson, a score by Academy Award and Tony Award winners Benj Pasek and Justin Paul, and direction by four-time Tony Award nominee Michael Greif (RENT, Next to Normal). Rolling Stone calls Dear Evan Hansen, "a game-changer that hits you like a shot in the heart." The original Broadway cast recording of Dear Evan Hansen made an extraordinary debut on the Billboard 200 when released and entered the chart at #8—the highest charting debut position for an original cast album since 1961. A special edition coffee table book authored by Levenson, Pasek and Paul, Dear Evan Hansen: Through the Window is now available, offering an in-depth, all-access look at the musical, including never-before-seen production photos and cast portraits, behind-the-scenes stories and a fully annotated script by the authors.

HELLO, DOLLY!
Starring Broadway legend Betty Buckley
August 6 – 18, 2019
Winner of four Tony Awards, including Best Musical Revival, Broadway’s most beloved musical is back where it belongs! Directed by Tony Award winner Jerry Zaks and featuring choreography by Tony Award winner Warren Carlyle, Hello, Dolly! is "the best show of the year" (NPR). The bold and enchanting Dolly Gallagher Levi is a widow, matchmaker and professional meddler. When she decides the next match she needs to make is for herself, she weaves a web of romantic complications for her newest client, the cantankerous "half-a-millionaire" Horace Vandergelder, his two clerks, a pretty hat maker and her assistant. Hello, Dolly! features Broadway classics like "Before the Parade Passes By," "It Only Takes a Moment," "Put on Your Sunday Clothes" and, of course, the title number, "Hello, Dolly!" Breaking box office records week after week and receiving thunderous critical raves on Broadway, this "gorgeous" new production (Vogue) pays tribute to the original work of legendary director/choreographer Gower Champion—hailed both then and now as one of the greatest stagings in musical theater history. Rolling Stone calls it "a must-see event. A musical comedy dream. If you’re lucky enough to score a ticket, you’ll be seeing something historic. Wow, wow, wow indeed!"