The 2019 Tony Awards are officially over! June 9 was a night of powerful speeches, unforgettable performances and yet another iconic Billy Porter fashion statement. Here are some illustrations of the most memorable moments from Broadway’s biggest night! Make the magic last a little longer. 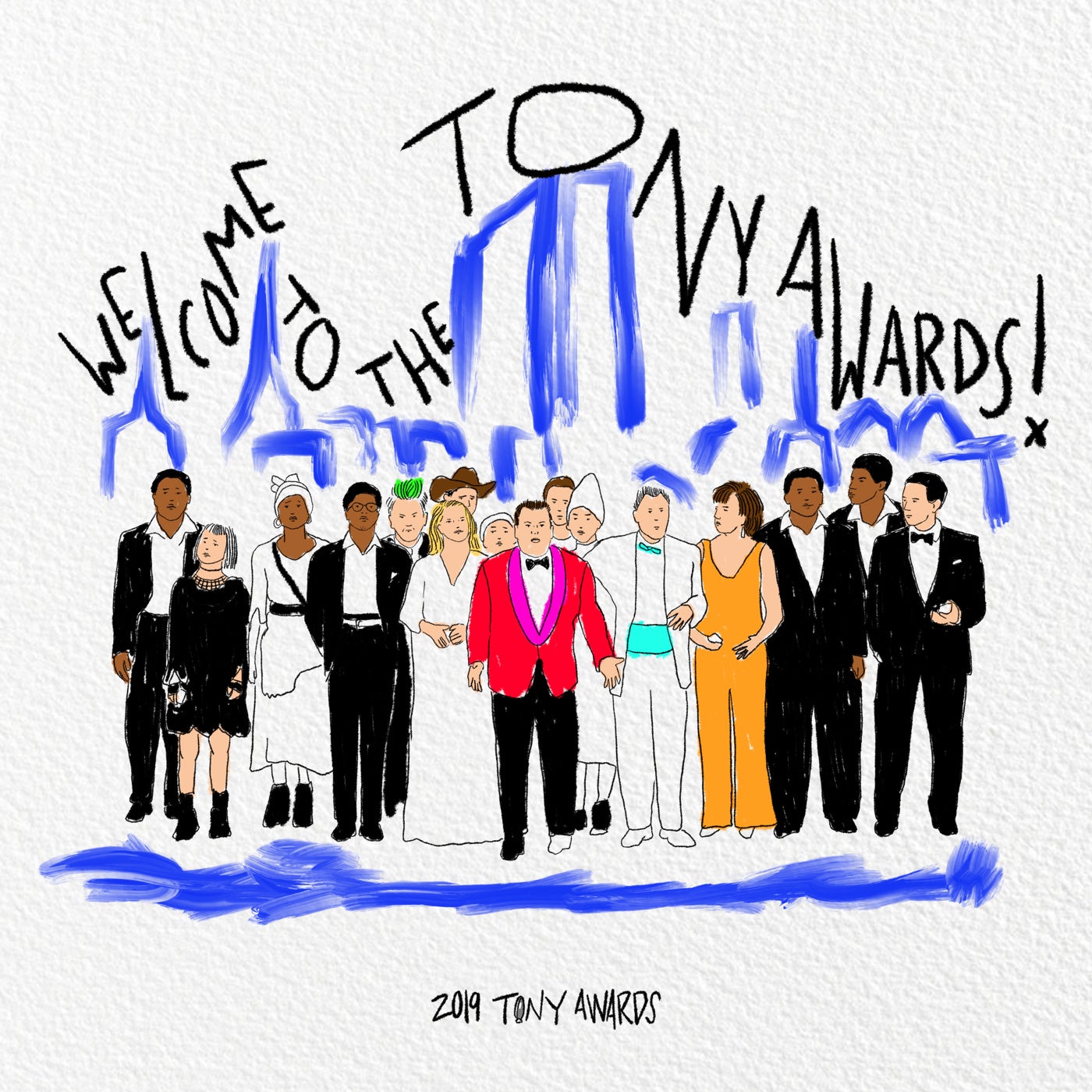 JAMES CORDEN BIG OPENING NUMBER
Kick lines, razzle dazzle and getting Bryan Cranston to declare, “I am bloated as hell, and I’m not going to take it anymore” on live television? James Corden’s Tony opener had all that and more. The boisterous love letter to live theater featured appearances from Ain’t Too Proud‘s Classic Five, Beetlejuice‘s delightfully spooky stars, The Prom‘s royal court and many more members of the Broadway community, setting the tone for a fun evening. 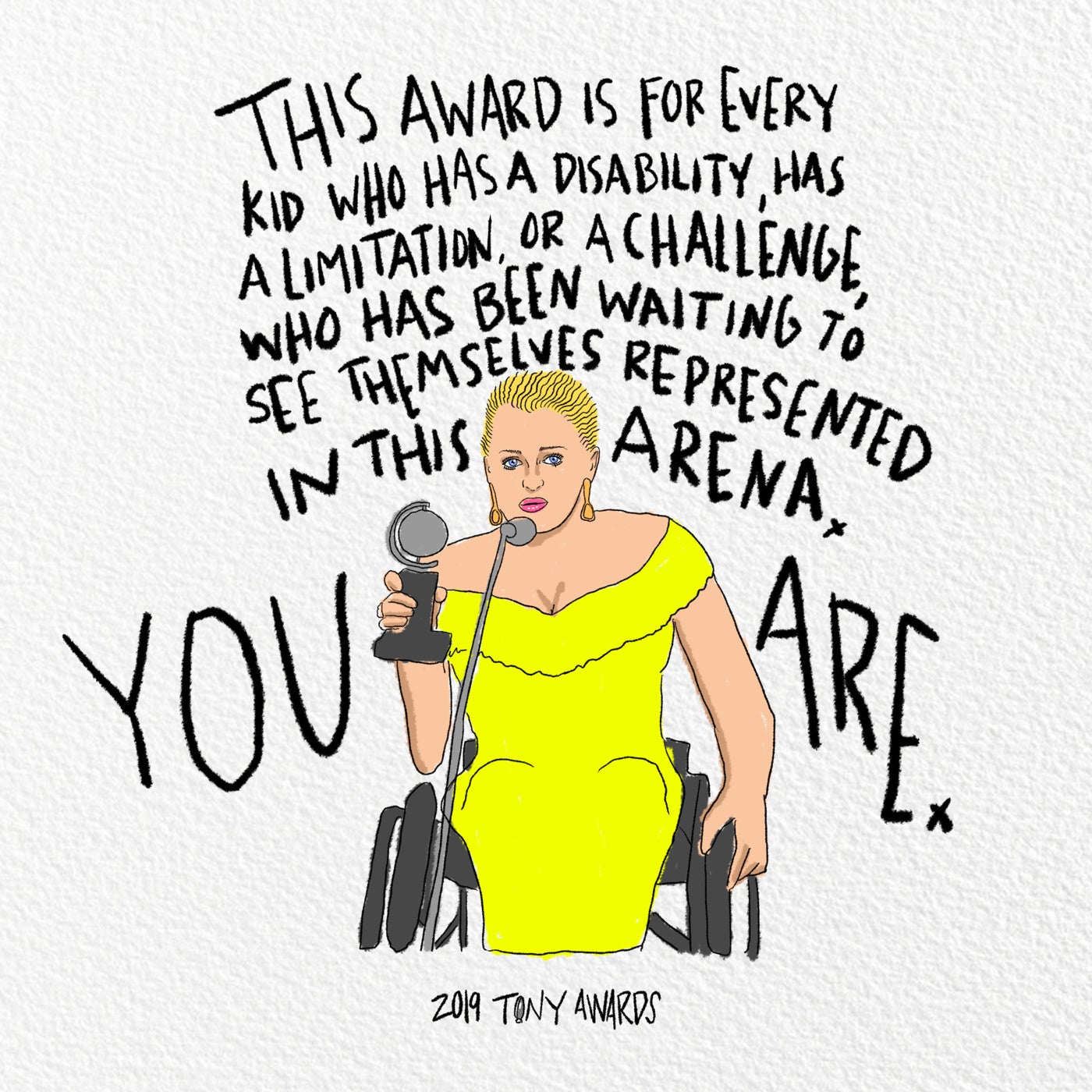 ALI STROKER (AND THE AMERICAN THEATRE WING) SAY YES TO INCLUSIVITY
Oklahoma! star Ali Stroker won a Tony Award for her performance as Ado Annie, the girl who “cain’t say no.” Stroker made history as the first performer in a wheelchair to win a Tony Award (or even be nominated), and the trailblazer made the most of the milestone moment when she took her place at the podium. “This award is for every kid who is watching tonight who has a disability, has a limitation or a challenge, who has been waiting to see themselves represented in this arena,” Stroker said in her acceptance speech. “You are.” 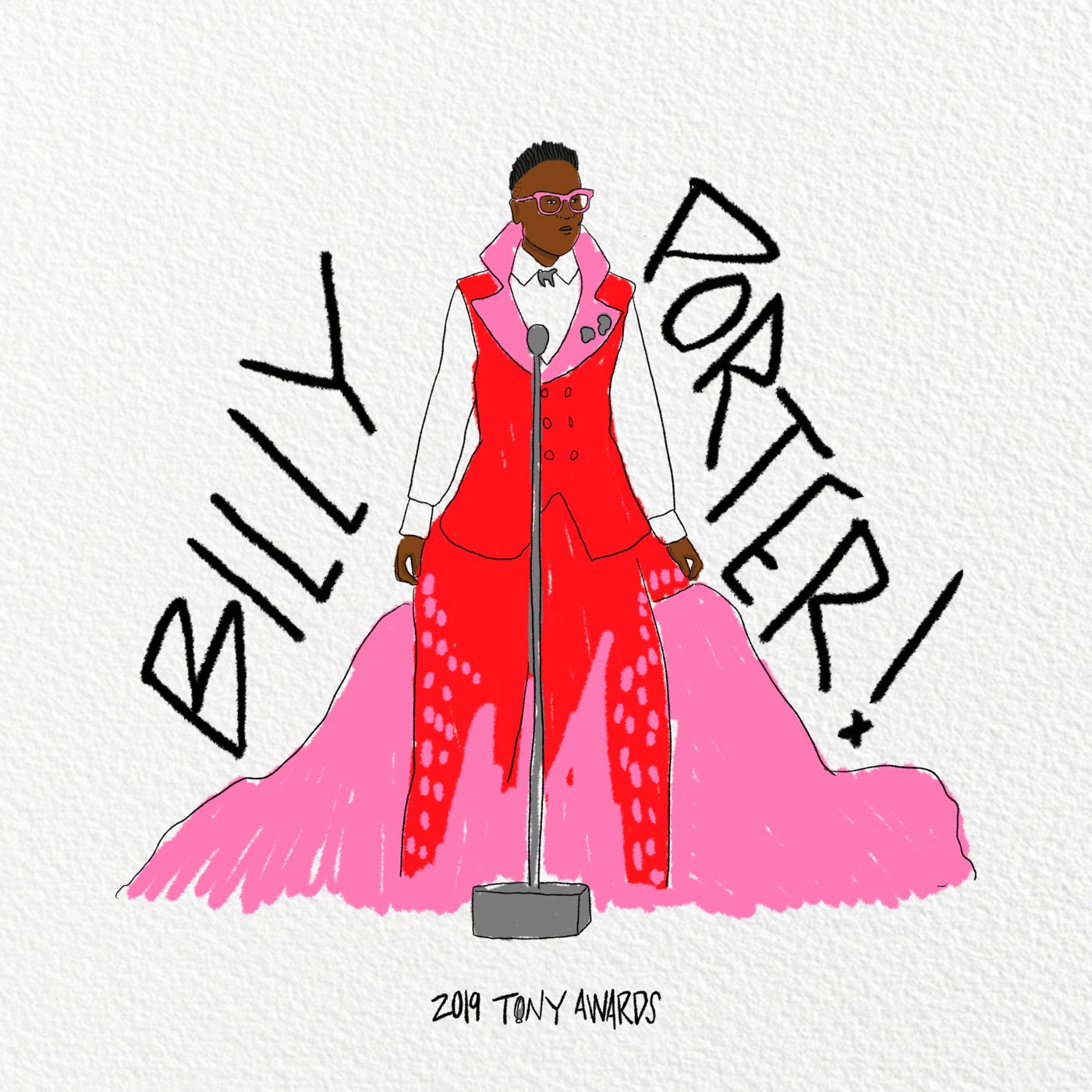 THE CATEGORY IS: BILLY PORTER!
From the Academy Awards to the Met Gala to just about every red carpet around, Kinky Boots Tony winner and Pose star Billy Porter knows how to turn a look. The 73rd annual Tony Awards was no exception; he looked runway-ready on the Radio City Music Hall stage when he presented the Theatre Education Award. Fun fact: his ensemble was made from the Kinky Boots curtain. Everybody say yeah to Porter’s reign as a style icon! 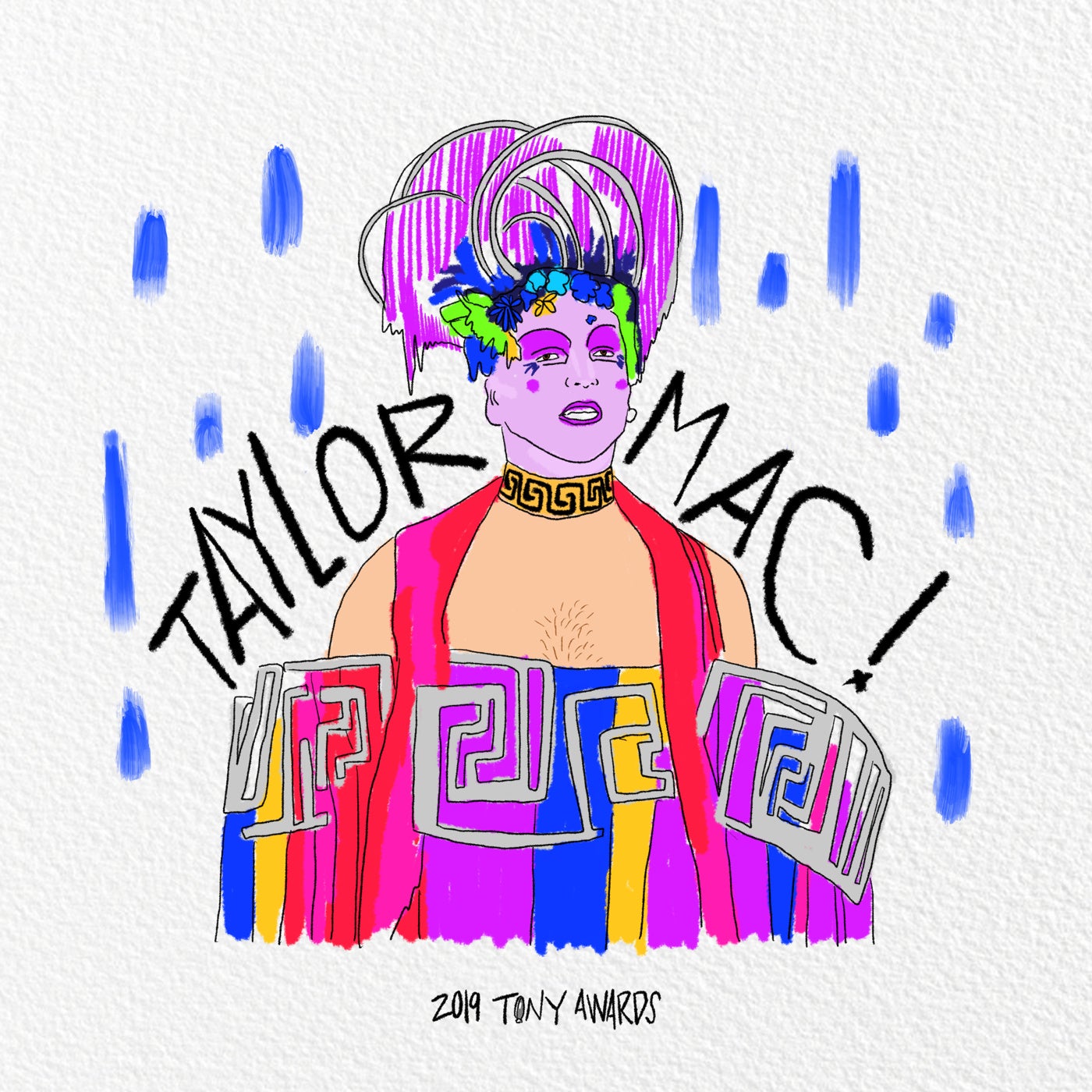 TAYLOR MAC GLITTERS WHILE TALKING GARY
Downtown theater darling and MacArthur “Genius” Grant recipient Taylor Mac also turned heads on Tony night. Gary‘s Tony-nominated playwright addressed the crowd in full beat and a sparkly headress, saying, “Hello, queens! I wrote a play. It’s called Gary: A Sequel to Titus Andronicus, and it asks the question: ‘How can one cope when it feels like you’re living in a sequel of Shakespeare’s bloodiest play?'” Admiring Mac’s fabulous fashion and makeup seems to be a great start. 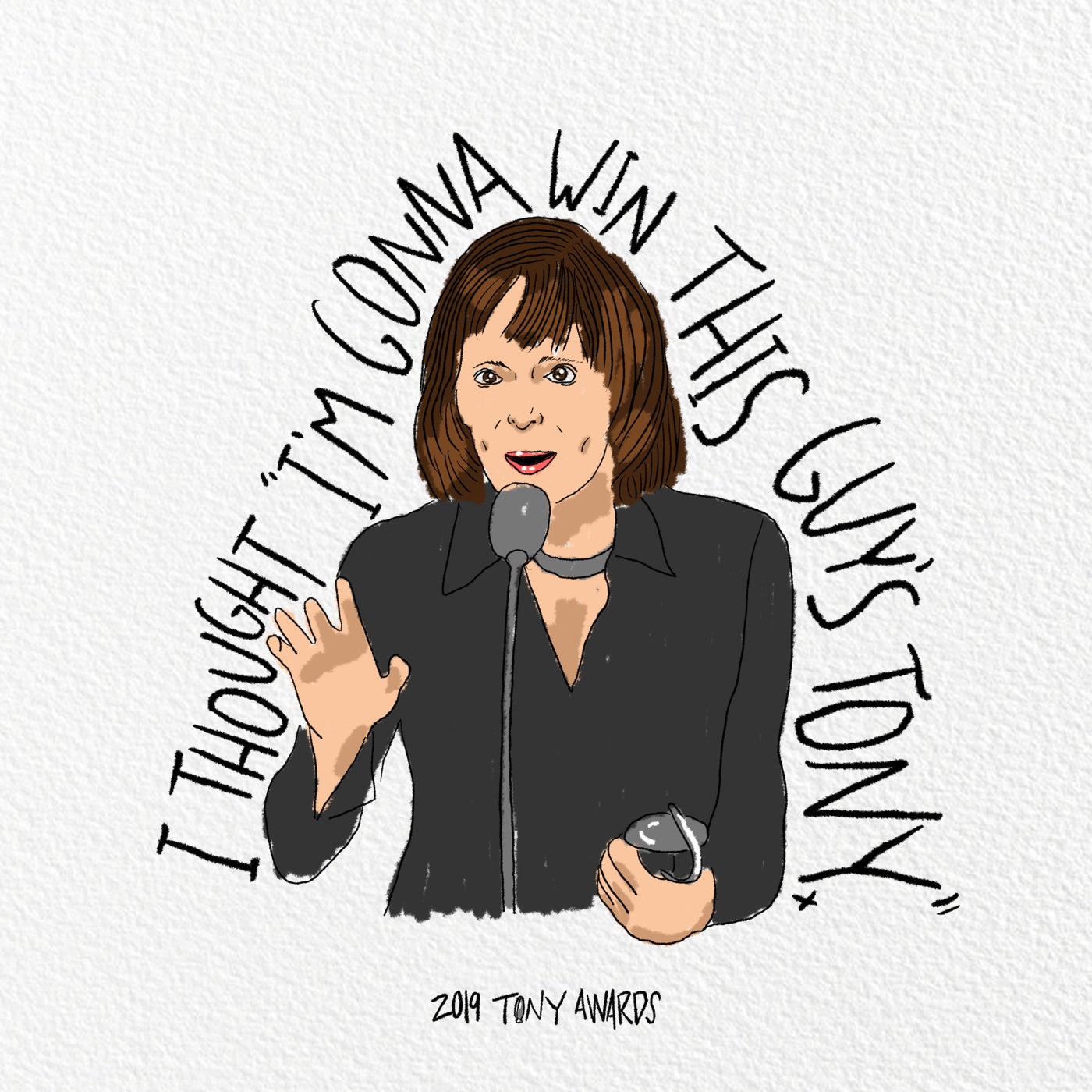 ELAINE MAY’S FIRST TONY WIN
Elaine May is a screen and comedy legend, and last night, she became a Tony winner. “I never won a nomination for acting before, so, I want to tell you how I did it,” May said in her acceptance speech. “I got in a play written by Kenneth Lonergan.” May garnered the Tony Award for her heart-wrenching performance as a grandmother struggling with Alzheimer’s disease in Lonergan’s The Waverly Gallery. Her return to the Great White Way in the moving memory play will not be soon forgotten. 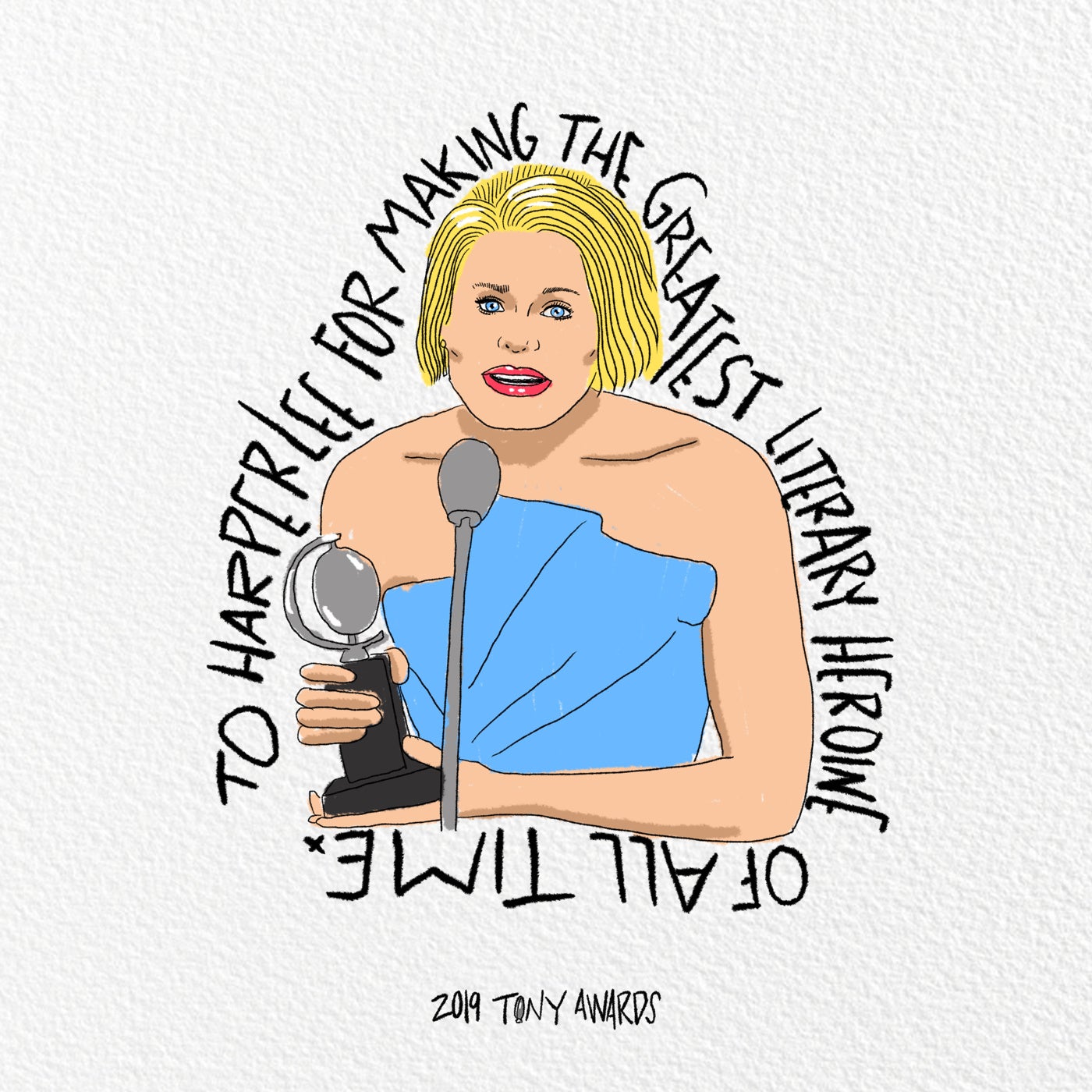 CELIA KEENAN-BOLGER’S TONY WIN
Another admired lady also had a Tony first on June 9: Celia Keenan-Bolger, who had previously been nominated for her performances in The Glass Menagerie, Peter and the Starcatcher and The 25th Annual Putnam County Spelling Bee, received the award for Best Featured Actress in a Play for her turn as iconic character Scout Finch in Aaron Sorkin’s To Kill a Mockingbird. “I have the most incredible friends in the whole world, and they take care of me and love me when I’m not winning a Tony Award,” she said in an emotional speech at the podium. Her pals must be psyched for her big night. 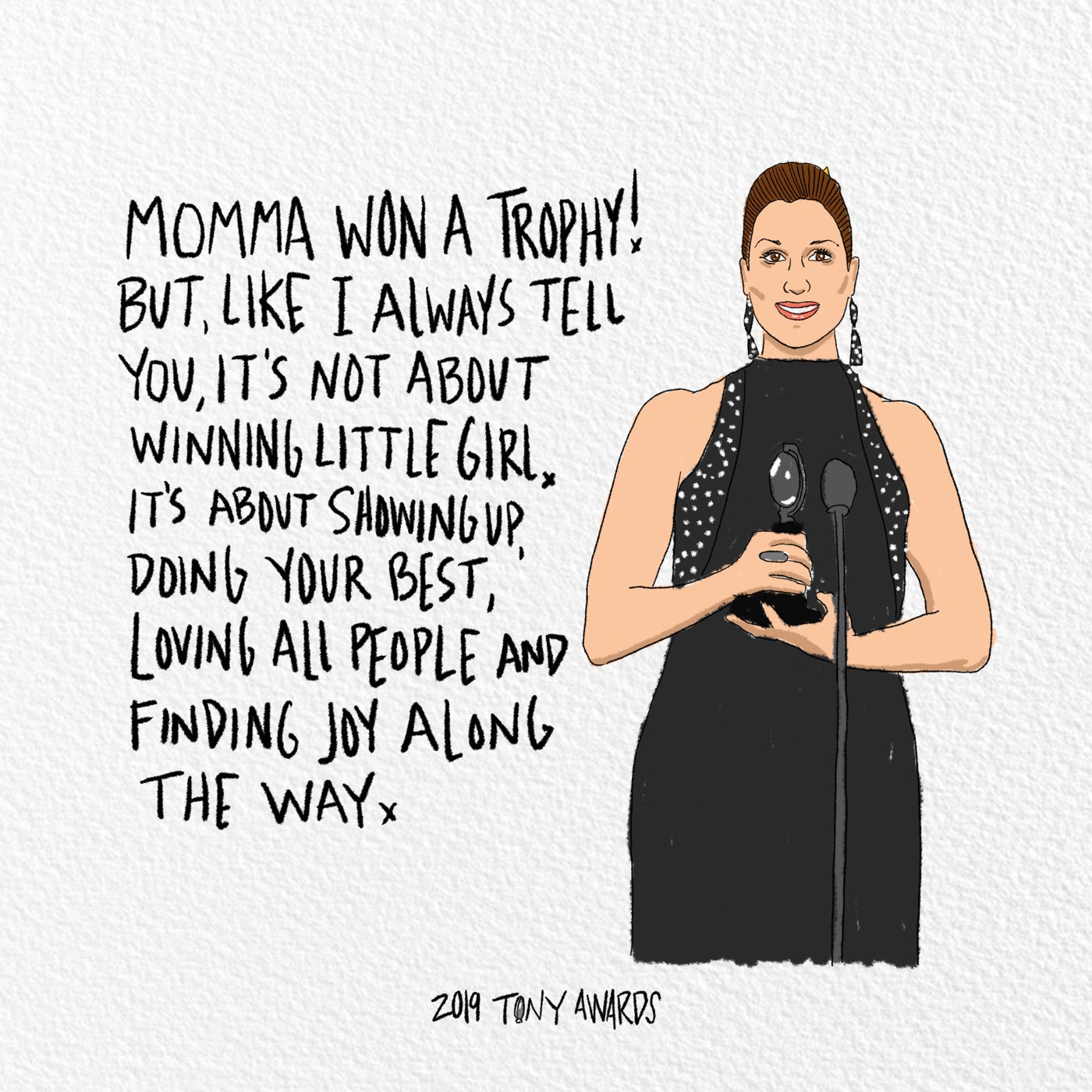 STEPHANIE J. BLOCK SHOUTS OUT HER YOUNG SELF AND DAUGHTER
The Cher Show star Stephanie J. Block also garnered her first Tony on Broadway’s biggest night. She brought a childhood diary entry with her to the stage as she accepted the award for Best Leading Actress in a Musical. “Thirty years later, I would tell that little girl, ‘It’s nothing that you expected and everything that you needed.'” She also delivered a message to her daughter Vivienne: “Vivi, Momma won a trophy, but like I always tell you, it’s not about winning, little girl, it’s about showing up, doing your best, loving all people and finding joy along the way.” 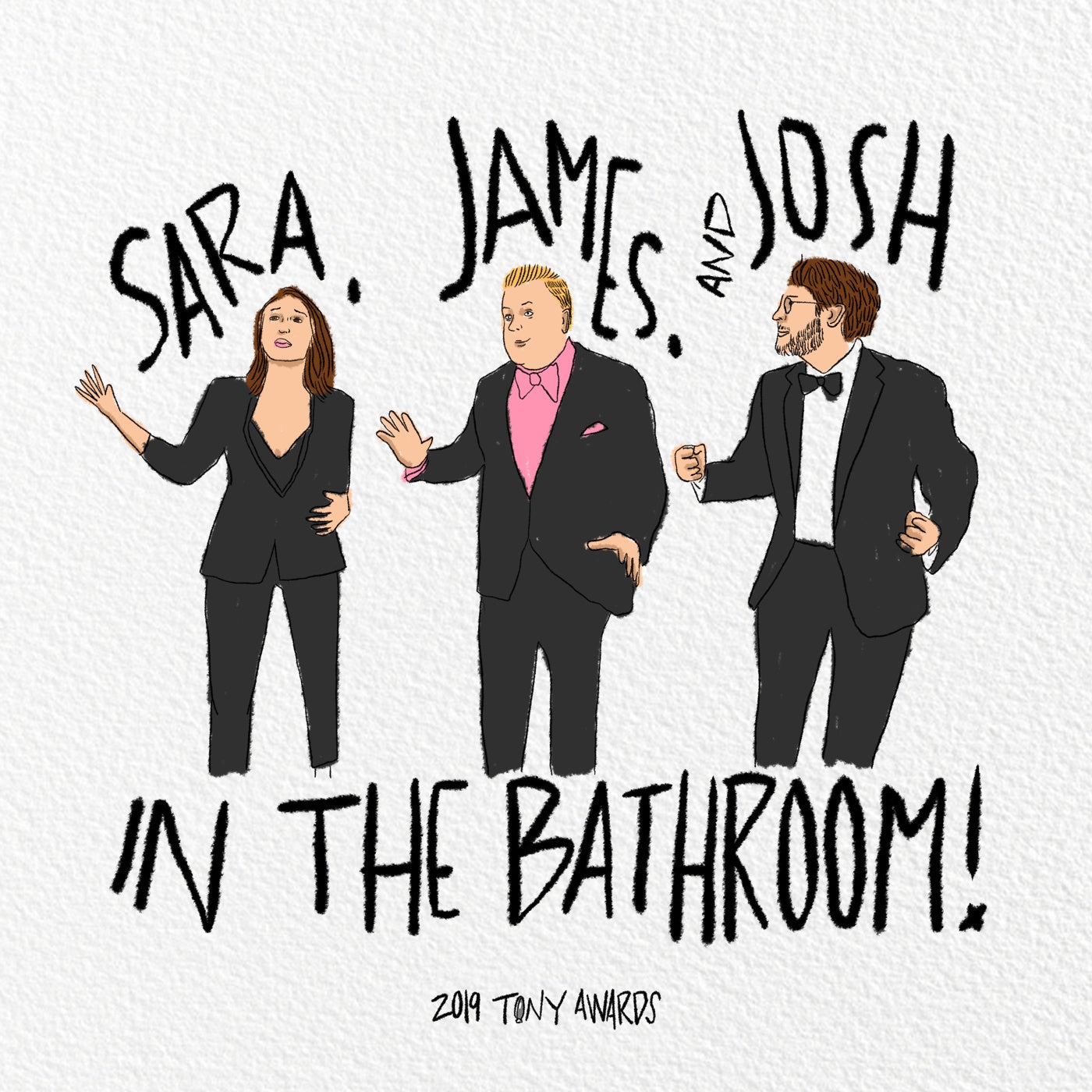 JAMES CORDEN (AND SARA BARELLES AND JOSH GROBAN) IN THE BATHROOM
The fan-favorite musical Be More Chill garnered a Tony Award nomination for Joe Iconis’ score. The number “Michael in the Bathroom” is particularly get-stuck-in-your-head-good, so much so that Tony host Corden created a hilarious parody of the number about Tony-hosting anxieties—complete with appearances from last year’s hosting duo, Sara Bareilles and Josh Groban, as well as past host Neil Patrick Harris. Now that’s a bathroom pow-wow we want in on! 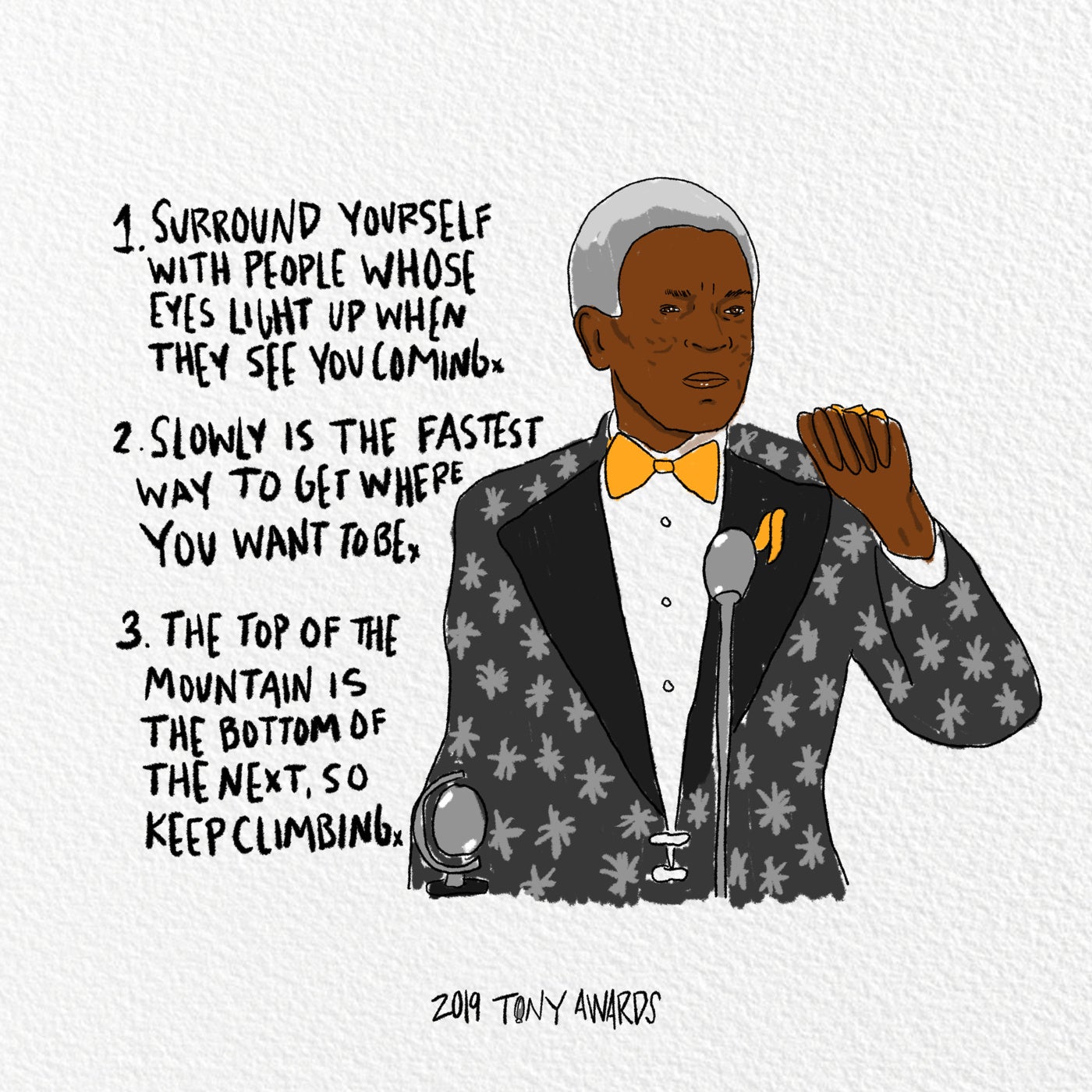 ANDRE DE SHIELDS DROPS KNOWLEDGE AT THE PODIUM
André De Shields adds a dash of fabulousness to everything that he does—have you seen the gold shoes? The Broadway legend received the Tony Award for Best Featured Actor in a Musical for his performance as the narrator Hermes in the Tony-winning musical Hadestown. “Baltimore, Maryland are you in the house?” De Shields asked about his hometown as he graced the stage. He went on to share some wisdom that we need on T-shirts, bumper stickers and maybe even a tattoo ASAP. 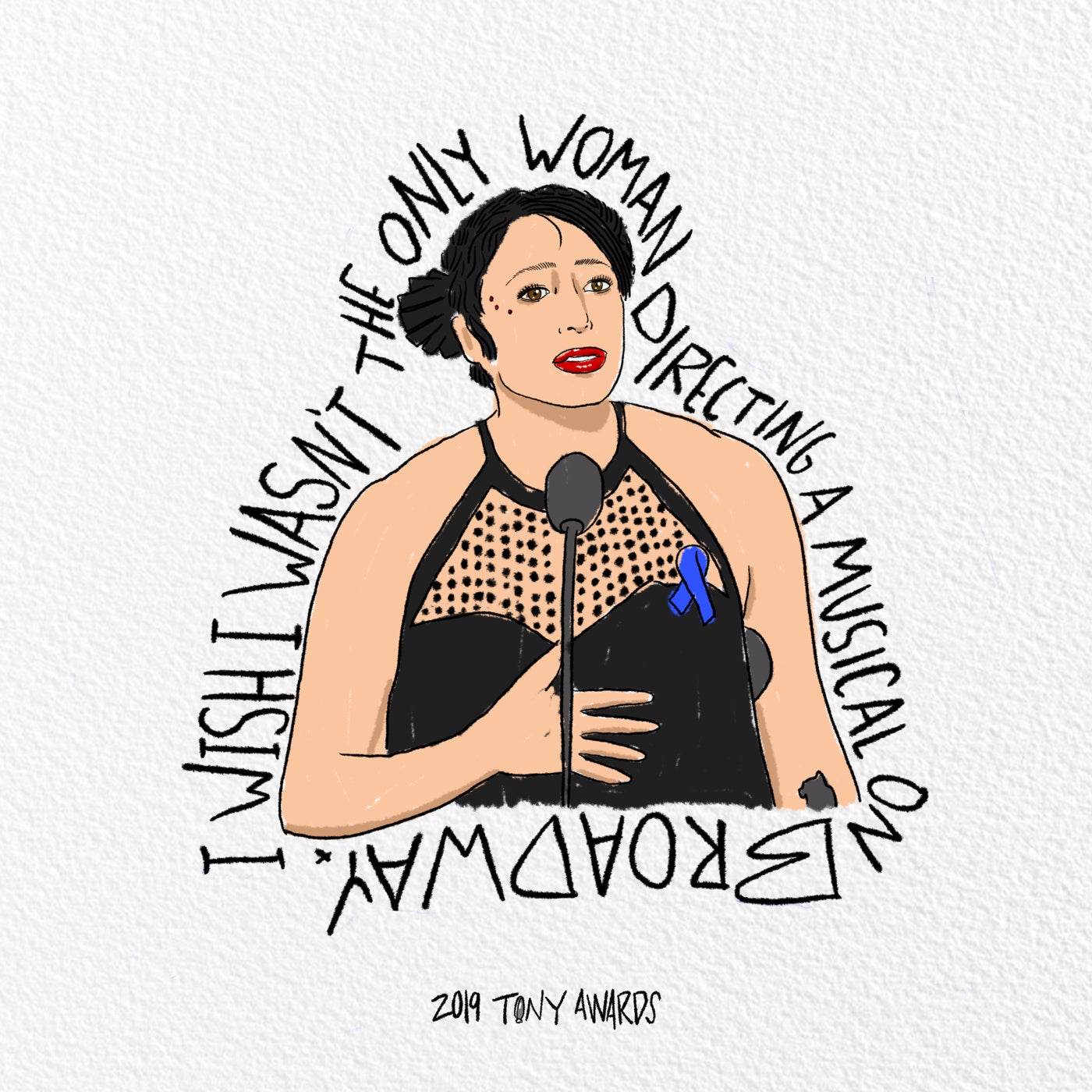 RACHEL CHAVKIN’S MESSAGE FOR ARTISTS
Hadestown triumphed at the Tony Awards with eight wins total, and director Rachel Chavkin (the only woman nominated in her category for Best Director of a Musical) also used her moment in the spotlight as a call for more inclusivity: “My folks raised me with the understanding that life is a team sport, and so is walking out of hell. That’s what is at the heart of this show: it’s about whether you can keep faith when you are made to feel alone. It reminds us that that is how power structures try to maintain control,” she said. “This is why I wish I wasn’t the only woman directing a musical on Broadway this season. This is not a pipeline issue. It is a failure of imagination by a field whose job is to imagine the way the world could be. So, let’s do it.” Brava!