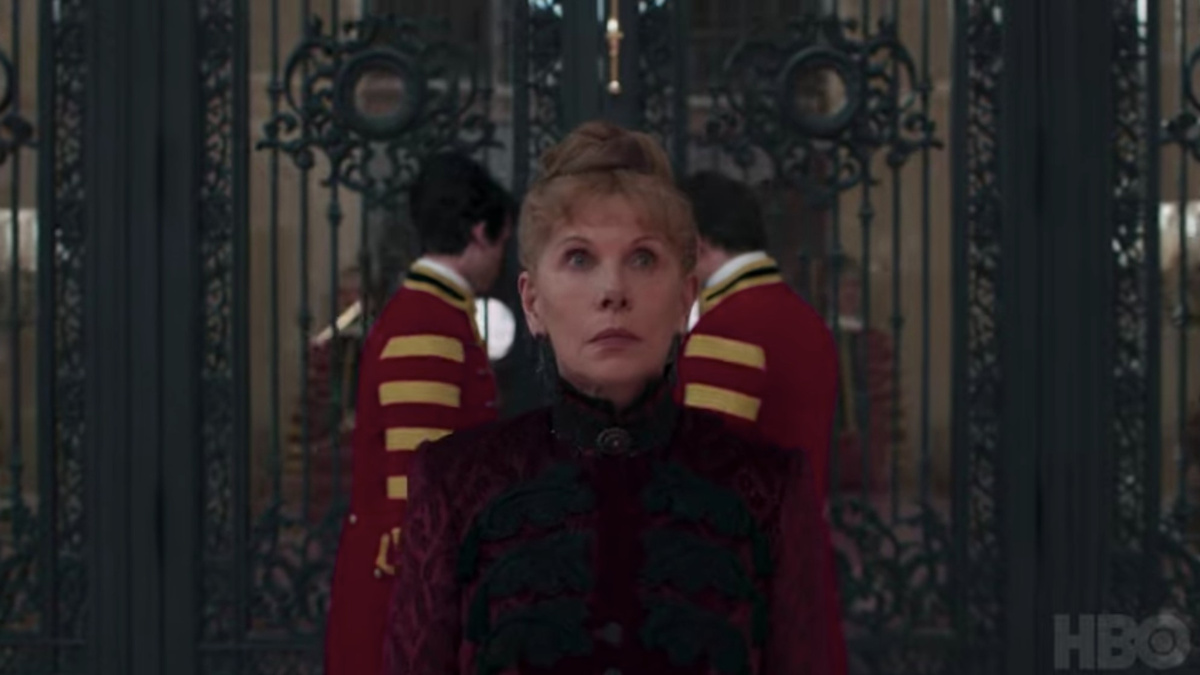 The Gilded Age Gets Second Season
After the release of only three episodes, The Gilded Age, HBO’s period piece packed with Broadway stars, has been renewed for a second season, according to Variety. The show stars Tony winners Cynthia Nixon and Christine Baranski and comes from Downton Abbey creator Julian Fellowes. The nine-part series centers on the orphaned daughter (Louisa Jacobson) of a Southern general who moves in with her aunts Agnes van Rhijn (Baranski) and Ada Brook (Nixon) in 1880s New York City and is thrust into high society. Audra McDonald, Carrie Coon, Katie Fineran, Claybourne Elder, Michael Cerveris, Kelli O’Hara and Denée Benton are just a few of the stars in the series, which premiered on January 24.

Watch the Lyric Video for “Someone To Say” from Cyrano
A new clip from the Golden Globe-nominated musical film adaptation of Cyrano, starring Peter Dinklage, has arrived. In the film, Haley Bennett plays love interest Roxanne, a role that she played alongside Dinklage at the Goodspeed Opera House’s Norma Terris Theatre in 2018. Directed by Joe Wright, the film’s cast also includes Kelvin Harrison Jr., Brian Tyree Henry and Ben Mendelsoh. The music for Cyrano is by The National’s Aaron Dessner and Bryce Dessner with lyrics by Matt Berninger (also from The National) and Carin Besser, who has contributed to many of the band’s songs. The movie hits theaters on February 25. Watch Dinklage and Harrison Jr. perform “Someone To Say” in the lyric video below.

Nathan Lane to Return to Only Murders in the Building
Three-time Tony winner Nathan Lane is set to return to Only Murders in the Building for season two, Deadline reports. He played possible suspect Teddy Dimas in season one. “I come back. I can’t tell you how, but I do come back,” Lane told Deadline. “He comes back in an interesting way, and there’s a big surprise.” The Hulu comedy series stars comedy legends Steve Martin and Martin Short alongside Selena Gomez. Produced by This Is Us creator Dan Fogelman and created and written by Martin and John Hoffman, the series revolves around three strangers who share an obsession with true crime and suddenly find themselves wrapped up in one. Gomez won a People’s Choice Award for her performance in season one, and the series, Martin and Short were recognized with Golden Globe nominations.

Bridgerton‘s Season Two Trailer Has Arrived
It’s a great day for Bridgerton fans. The hit Netflix series, which is narrated by stage and screen icon Julie Andrews and inspired the Grammy-nominated Unofficial Bridgerton Musical album, returns to Netflix on March 25, and a teaser trailer for season two is now available. Gear up for all of the scandal, pomp and circumstance with the first look below!

Clive Owen, Raúl Esparza & More Join New FX Series
Broadway alum Clive Owen and four-time Tony nominee Raúl Esparza are joining the upcoming FX limited mystery series The Retreat. According to Variety, Owen, Esparza, Harris Dickinson, Alice Braga, Jermaine Fowler, Joan Chen, Edoardo Ballerini, Pegah Ferydoni, Ryan J. Haddad and Javed Khan will appear alongside Emma Corrin and Brit Marling. Marling co-created the series with Zal Batmanglij. They previously worked together on Netflix’s The OA. The series follows a Gen Z amateur sleuth named Darby Hart (Corrin). Darby and 11 other guests are invited by a reclusive billionaire to participate in a retreat at a remote and dazzling location. When one of the other guests is found dead, Darby must fight to prove it was murder against a tide of competing interests and before the killer takes another life.