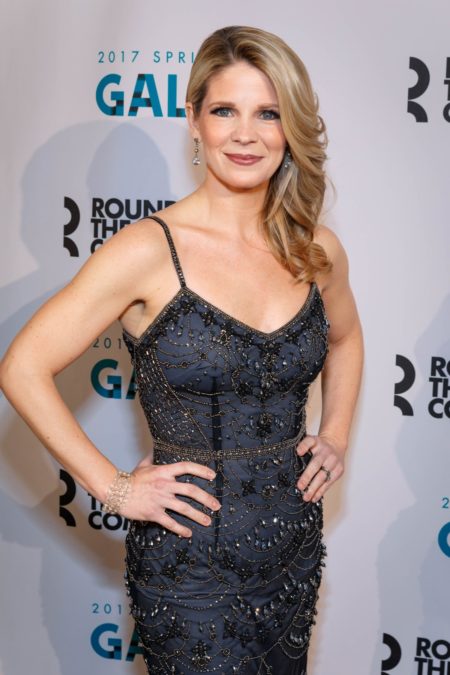 Tony Winner Kelli O’Hara on Why Her Broadway Turn in Kiss Me, Kate Will Be Good for Her Soul

Over two decades on the stage, Kelli O’Hara has built a formidable career, and is one of the leading musical stars of her generation. And after six (!) nominations, the legit powerhouse finally landed a Tony Award in 2015 for playing Anna in The King and I, a performance she just reprised in London’s West End. For her first time back on the boards since that triumph, O’Hara has a chosen a lusty musical comedy role: Lilli Vanessi in Cole Porter’s Kiss Me, Kate.

“She’s larger than life,” O’Hara says. “But I want to try to put every bit of humanity that I can into her.” Vanessi is a vain actress forced to hit the road in Shakespeare’s The Taming of the Shrew, playing Kate opposite the Petruchio of her warring ex-husband, Fred Graham (Tony nominee Will Chase). “I want to really get inside the love story,” she explains. “And why they’re both still hanging on because obviously they are.”

The 1948 classic, the first to ever named Best Musical by the Tony Awards, was last seen on Broadway in an acclaimed 1999 revival starring Brian Stokes Mitchell and the late Marin Mazzie, which O’Hara attended when she was an aspiring performer. “I can see her in my mind,” she remembers, calling the Tony-nominated performance “brilliant.” “She was just so spunky and energetic.” Mazzie’s final Broadway performance was as Anna in The King and I, replacing O’Hara at the end of her run in 2016 during her battle with ovarian cancer. “She’s such a hero of mine,” O’Hara says. “The idea of doing [this show] helps me honor her in some way.”

Inspired by husband-and-wife stars Alfred Lunt and Lynn Fontanne, Kiss Me, Kate gleams great comedy from the tumultuous relationship between Lilli Vanessi and Fred Graham. But some of the famous scenes, like when Fred puts Lilli over his knee and spanks her, require review in 2019. No wonder director Scott Ellis has enlisted Tony-nominated writer Amanda Green to join the creative team and adjust the original book by legendary librettists Sam and Bella Spewack. “We just want it to be the best version that we can do,” O’Hara says. “We’re going to try to make it fresh, we have great ideas. It’s gonna be exciting.”


Fans can catch O’Hara in director Bartlett Sher’s The King and I, filmed live at the London Palladium last summer, when it hits movie theaters on November 29 and December 4. O’Hara herself will not be attending: “Heck no! I tend not to do that unless I go home and go to bed for the rest of the day! But I’m proud that we recorded it because I think it was beautiful. The theater kind of looked like the grandness of the sets. It all fit together so beautifully.”

O’Hara reunited in London with Broadway co-stars Ken Watanabe as the King and Ruthie Ann Miles as Lady Thiang. Miles kept her commitment to the production months after surviving the auto accident that killed her four-year-old daughter and unborn child. “I think [King and I director] Bart Sher kind of forced her, in a way, to just get up and come” O’Hara says. “And I’m sure it wasn’t easy, but she showed up and she was gorgeous.”


Since her Tony triumph in King and I, O’Hara has been receiving acclaim for TV work—playing the mother of a suicide victim on the Netflix series 13 Reasons Why as well as an Emmy-nominated turn on the boundary-breaking web series The Accidental Wolf. After the darkness of her recent work, she is looking forward to living in the joy of Kiss Me, Kate, starting February 14 at Studio 54.

“The idea of going to do a musical comedy for a while is actually not just a career move,” she explains. “But it’s going to be an emotional move that is good for my soul.”


Broadway.com Bonus: Watch O'Hara sing "So In Love" from Kiss Me, Kate